University of Glasgow research finds Robert Burns is worth £203 million annually in direct value to Scotland, and almost £140 milion in brand value

Scotland’s national bard is worth just over £200 million a year to the Scottish economy and the poet’s brand is worth nearly £140 million annually, a report by the University of Glasgow has revealed.

It found that Burns economic and cultural importance to the Scottish economy is now estimated to be £203 million annually and the bard’s brand is worth £139.5 million a year.

While there have been studies of the economic impact of cultural Burns industries before – by economist Lesley Campbell (2003) and Moffat Centre (2005) who both valued Burns impact to Scotland at £157 million – this is believed to be the first assessment carried out on this scale.

Click here to read the rest of the article. 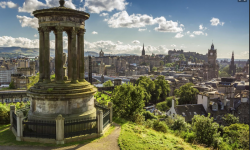 All the latest news, information and updates relating to the Awards for Scottish Studies and Scots Language.