At Nourish Scotland we have spent years advocating in partnership with others for a Good Food Nation Bill, and now that this legislation is on the table we have to take the opportunity with both hands. We know that there is a real appetite from the people of Scotland for a fairer, healthier, and more sustainable food system, and that people want to be involved in shaping the food policies that affect us all. We’re running this crowdfunder to enable us to create resources and platforms for people to get involved in the consultation process – to genuinely facilitate participation, particularly of people most affected by food injustice.

Pre-consultation Good Food Nation action Does your elected representative know about the Good Food Nation Bill? The Scottish Government has committed to cross-cutting, framework legislation. This could be big, but there has been little show of leadership from Government. It’s clear civil society has to set the pace! We’re encouraging Nourish members and supporters to get in touch with your MSPs, and make sure they know that you care about the future of our food system and want to make the most of the Good Food Nation Bill to make some structural change. The Big Vegetable Summit: Peas Please Veg is good for business, the environment and our health. That was the message from Scotland’s first Vegetable Summit. The event, hosted by Nourish Scotland at the Royal Botanical Gardens of Edinburgh, on 24th October was all about making it easier to eat more veg. There were simultaneous summits in London and Cardiff – hosted by the Food Foundation and Food Cardiff, partners in the Peas Please project. We’ve had over a decade of ‘5-a-day’ messaging, it’s well understood but our diets haven’t changed. The summit involved pledges from major supermarkets, caterers, policy makers and producers to make veg more accessible, including increasing veg in ready meals and on menus. It also involved some big ideas, what if we subsidised soup and it was available on every street corner – would that help our health crisis? This is the beginning of a three-year project working on supply-side measures to eat more veg! Contact celia@nourishscotland.org.uk for more information. Marking World Food Day: the politics of our food system On the 16th October, Nourish partnered with UN House and the University of Edinburgh to host a panel discussion on the politics of our food system, and pathways to progress. Scotland’s Good Food Nation Bill can start us on a journey towards a sustainable food system. The legislation must be guided by Scotland’s commitment to the Sustainable Development Goals, and informed by the experiences of people in Scotland, particularly those most affected by food injustice.

Developing the local food producers network At the beginning of October, we hosted more than 30 local food producers from across Scotland at Falkland in Fife for a one-day networking event – among them participants of this year and last year’s Making a Living from Local Food programme, alumni from the New Farmer Programme and others. It was a rich day with space for peer-support and reflection, site visits to Meadowsweet Organics and an organic cattle farm and sessions with Business Gateway, the Farm Advisory Service and the Soil Association as well as local pioneers such as Bruce Bennett – who started the first commercial organic farm in Scotland. If you’re interested to be kept in the loop about Making a Living from Local Food, just e-mail Miesbeth at localfood@nourishscotland.org.uk. 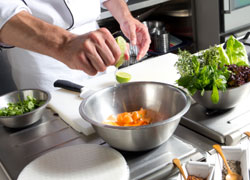